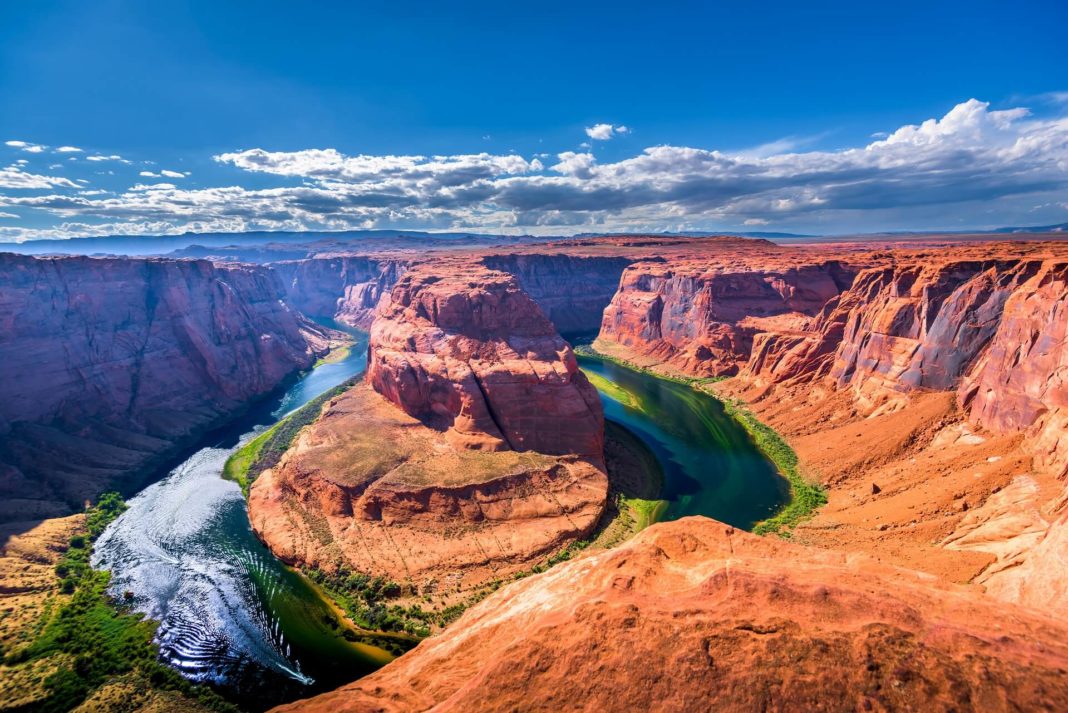 The Grand Canyon is the gorge of the Colorado River in Arizona through the Colorado Plateau. There is a full geological section in this canyon. Each series of rock layers has a different shade. The rocks of the canyon abound in fossils, from primitive algae to trees, from seashells to the remains of dinosaurs. The time of canyon formation is estimated at about 10 million years. The canyon began to be formed first in the western part of the current course, 17 million years ago, while the eastern end was formed 5-6 million years ago. In the next millions of years, the deep cutting of the river and deepening of the canyon, while maintaining its length, continued.

His “architect” was the Colorado River, which gouged the canyon as the Colorado Plateau rose. Before the Glen Canyon Dam was built in 1963, the river carried 500,000 tons of sediment per day through the canyon, and now only 80,000 tons. The current Grand Canyon is 349 km long and in the deepest place (Granite Gorge) 2133 m deep. The width ranges from about 800 m (under the Toroweap viewpoint on North Rim – North Edge) to 29 km at the widest point. This is the largest gorge in the world.

The Grand Canyon is a deep canyon in the middle course of the Colorado River, located in the plateau of the same name in the northern part of the American state of Arizona. 446 kilometers long, it was created as a result of the erosion of the river, which led to the cutting of the surface of a highland made of rocks still remembering the Mesozoic, Paleozoic, and even Precambrian times.

There you can see layers of limestone, slate, sandstone, and granite. The depth of the gorge sometimes exceeds 1,600 meters, and countless travelers dream about standing on its edge. This work of nature, since 1919, is protected by the Grand Canyon National Park, created by Congress decision. Over half a century later, this area was inscribed on the UNESCO World Cultural and Natural Heritage List.

Interestingly, until recently, the Grand Canyon was considered the largest gorge in the world. Until recently, in mid-2013, scientists from the University of Bristol, based on NASA data, discovered a huge canyon under the ice of Greenland, at least 750 kilometers long.

Skywalk in the Grand Canyon

In 2007, in the western part of the Grand Canyon, the Skywalk observation platform was built, which is referred to as the “world’s highest balcony.” For around USD 30, tourists have the opportunity to enjoy breathtaking views from a height of over 1200 meters. A mix of adrenaline and emotions guaranteed. The platform is made of steel and tempered glass resembles a horseshoe and is one of the most-chosen attractions that the Grand Canyon boasts. To get on it, in addition to the ticket, you also have to buy a trip.

When is the Grand Canyon worth visiting?

The colors of the Grand Canyon change depending on the season. When deciding on an expedition, remember that the heat in summer is extremely dangerous to health. High temperatures and low humidity are not conducive to sightseeing, which is reflected in statistics of fatal accidents that occurred in the gorge. Almost 700 people have died there since the mid-nineteenth century.

The best solution will be to plan your stay in spring or autumn. In April, May, and September and October, hiking in a gorge is a real pleasure. However, it is worth taking clothes that will protect against strong winds.